It seems churlish to refer to Native Instruments’ Kontakt as merely a ‘sampler’. That’s a little like referring to a computer as an abacus. The astonishing range and depth of the program’s capabilities, not to mention the availability of the free Kontakt Player, has seen it become /the/ platform on which to develop sample-based instruments. Not only does Kontakt provide sound designers with advanced tools for crafting original sample libraries, it also provides the means to compile those libraries, along with custom user interfaces, into standalone instrument packages. As a result, most commercial sample libraries are now released in the form of Kontakt instruments.

Of course, NI commissions and curates a vast collection of such instruments and, coming from the de-facto Kontakt experts, these often showcase the full extent of the platform’s capabilities, as demonstrated by the recently released Pharlight. Many of NI’s instruments dive deep into particular types of sound source. Pharlight does too. It’s built on vocal parts designed explore the full range of sounds the human voice is capable of.

Pharlight’s engine is based on the similar Straylight instrument created by the same development team. That engine builds its sound from two sound-generation modules, the first using a granular synthesis engine and the second a conventional multi-sample engine. These modules are backed by a sophisticated modulation system that includes tools for blending different modulation sources together into a single complex modulator. The instrument is designed to be responsive to these modulation changes, with a particular focus on X/Y pads as modulation controllers.

The samples packaged within the grain module are all derived from vocal performances of one form or another: sung choral notes, beatbox sounds and many other hums, breaths and idiosyncratic noises the human voice can produce. Many of these have been processed and resampled to bring out certain characteristics and to make them work well in the context of granular synthesis.

There’s a solid amount of control over how the engine goes about extracting sound grains from your source waveform. You can control, among other things, the bounds of the source waveform, how rapidly the current grain sampling point will scan through the waveform and in what direction, and the length of grains and the timing between them. You can also introduce a jitter that causes the sampling point to randomly jump around as it scans through the waveform. Another fine feature is that the granular engine’s sample point can be monophonic, with one sampling point shared by all notes, or polyphonic, with each note sporting its own sampling point.

The sample module has a different selection of source samples. Many of these are based on voice recordings but there are synth waveforms, drones, percussive sounds and special effects too. The idea is that the sample module can create a solid bedding on which the potentially more whimsical sounds of the grain module can bounce around. That bedding could be an initial transient, a drone to lock down the pitch or simply a sound that blends well with whatever you create in the grain module.

Interestingly, as well as having their own sets of built-in samples, both modules allow you to drag in your own samples. Hours of fascinating experimentation beckon. 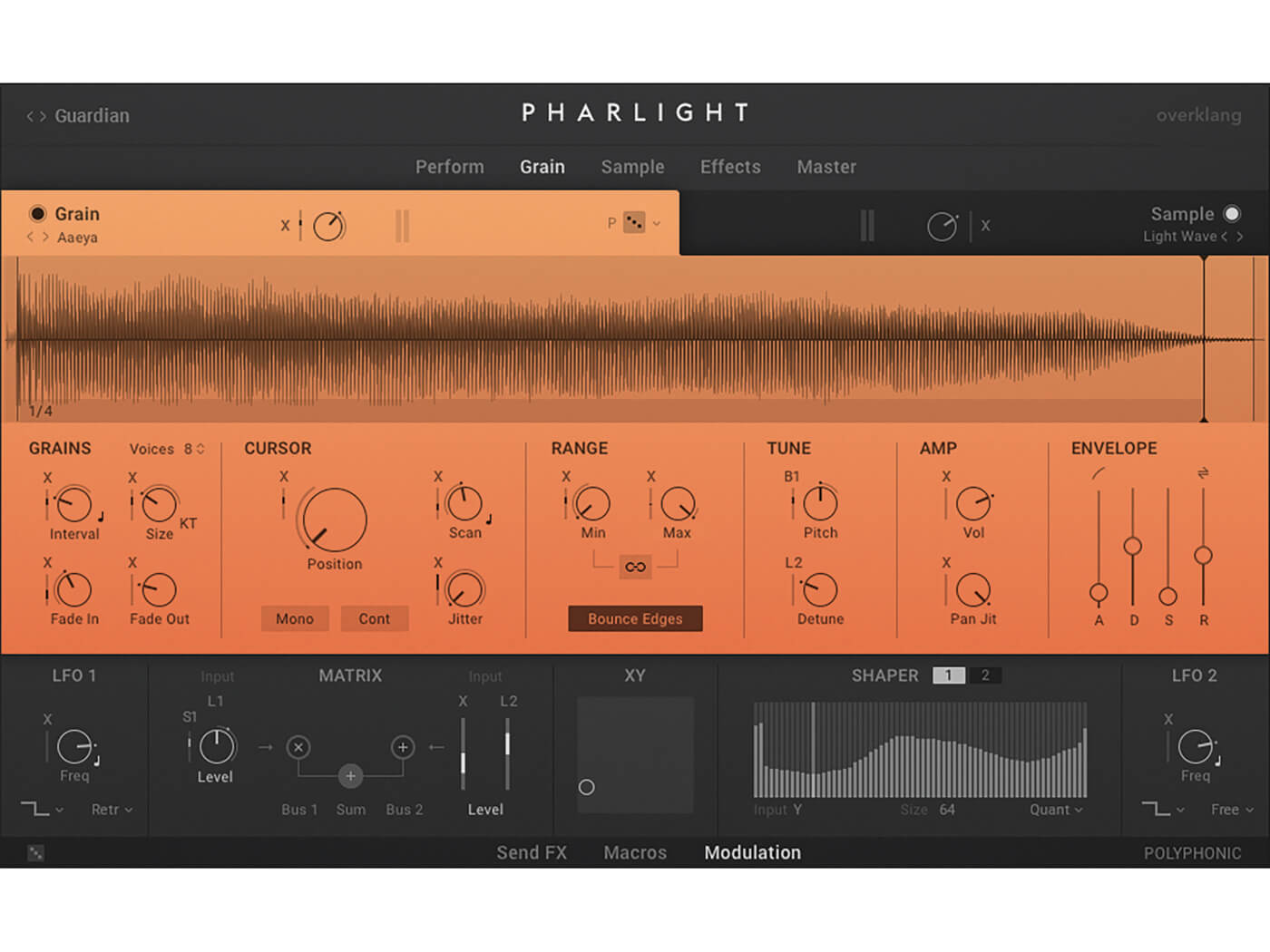 As well as common modulation sources such as velocity, aftertouch and LFO (of which there are two), Pharlight makes use of some less common sources such as note duration and the velocity of the previously played key. It also has a collection of sources that are all its own.

There are four macro modulation sources. These are rotary controls that aren’t directly connected to any particular parameter, and that just pass their current value to any modulation destinations they are connected to.

The pair of shaper modulators use the value of one modulation source to select an X-axis position on an editable bar graph of up to 128 steps. The graph’s Y value at the selected point becomes the shaper’s modulation value. The graph’s bars/steps can be switched between two values, can describe a simple ramp or curve or be something more elaborate. You can create some wonderfully complex modulation patterns by, for example, feeding an LFO into shaper 1 and using the result to drive shaper 2.

It doesn’t take much imagination to see that combining the matrix and shaper can create some astonishingly intricate and evolving modulation patterns. The only downside is that there is no mechanism to prevent you from creating a modulation feedback loop, whether intentionally or accidentally, and if you do then there could be crashing issues.

Given that the source samples are so heavily vocal-based, it’s no surprise that there’s a distinct voice and choral edge to many of the sounds Pharlight produces. But the instrument is more than just a choral-pad machine. Sure, it’s good at pads and contains a comprehensive collection of ahhs and oohs but it can also create rhythmic pulses, hooks, leads, basses and much more.

Pharlight’s deep modulation capabilities allow for expressive performances – doubly impressive when you remember you’re playing a sample-based instrument. Tools such as the matrix and shaper make some complex and ever-evolving modulations possible, and these are on fine display in all of the 375 included presets. The ability to drop in your own samples opens up Pharlight’s fascinating engine to endless experimentation and creativity.

Do I really need this? 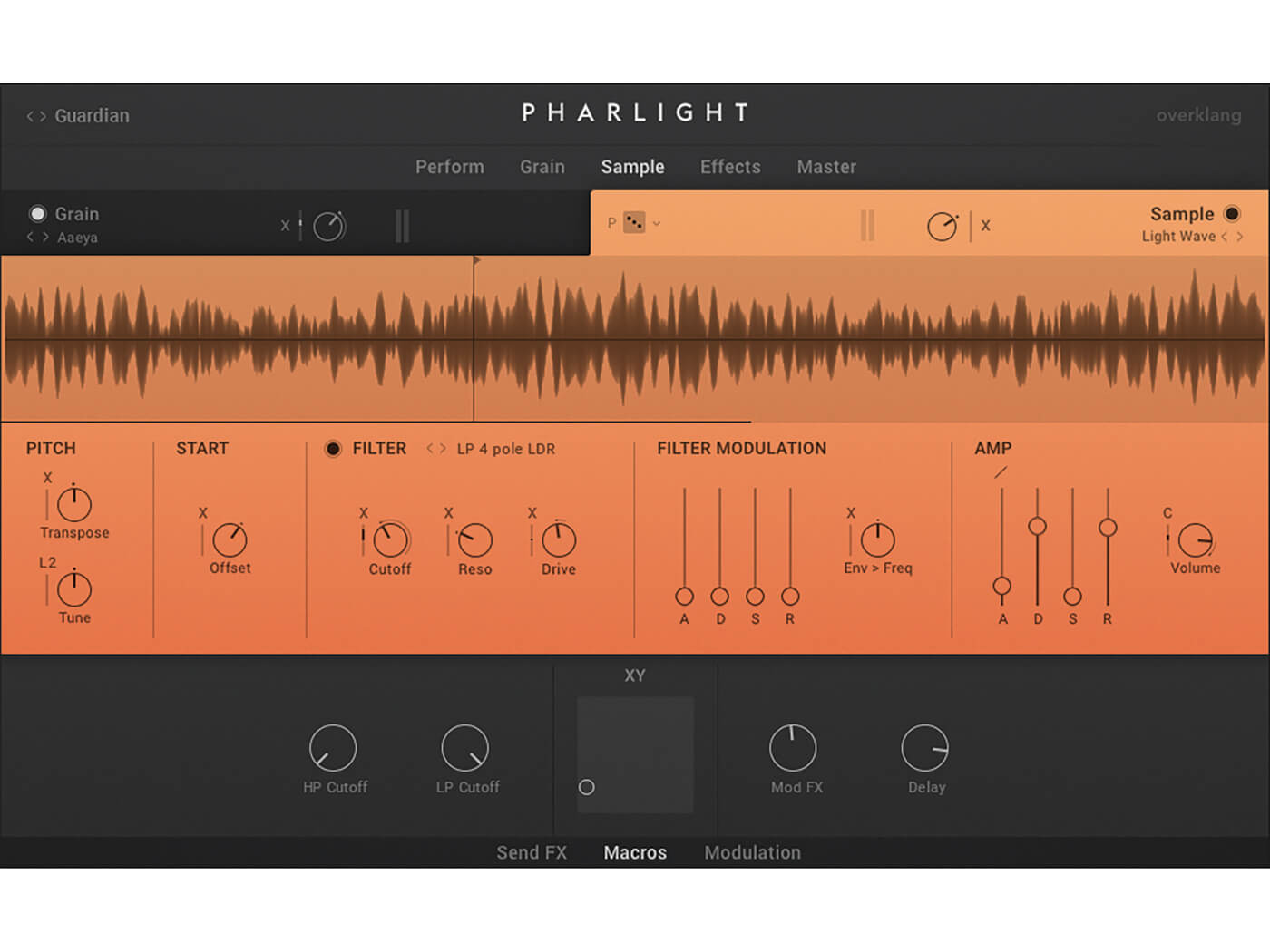 Kontakt’s flexibility has long allowed sound designers to develop instruments that are narrow in terms of the type and/or flavour of sounds they focus on but deep in how they explore the creative potential of them. In the case of Pharlight, that means an instrument that can bring something to the table no matter what genre of music is on the menu.

Pads and atmospheres are well represented but there’s a startling range of sound types on offer despite the largely vocal-based source material. Sound designers will love digging down into Pharlight’s synthesis engine and sophisticated modulation tools, while musicians and composers will adore the rich and evolving sound and the way Pharlight responds to expressive performance inputs.