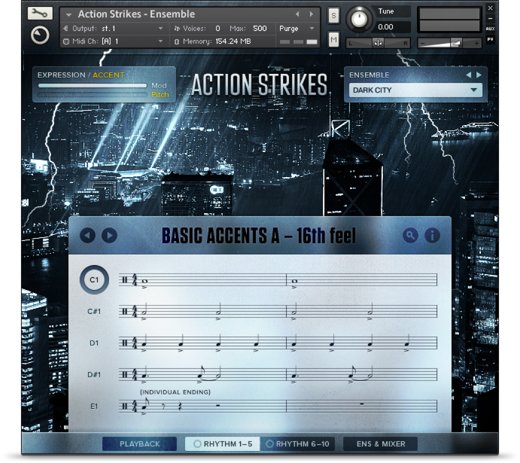 STRIKE UP THE DRUMS

Hundreds of timeless rhythms, adaptable for any project. And a one-of-a-kind interface that makes creating blockbuster orchestral percussion faster than ever. Become the conductor – this is ACTION STRIKES.

ACTION STRIKES gives you 12 carefully-assembled and meticulously recorded ensembles. Each features its own unique sound, accurately capturing the thrill of a live orchestra.

Go in deep – mix and match the high, middle or low sections of any ensemble with any other with total freedom. Together, you get over 1,700 unique sonic combinations for years of inspiration.

ACTION STRIKES puts a live percussion ensemble under your leadership. Change rhythms on the fly with intuitive key switches – your left hand controls accents while your right hand chooses variations.

Bring the sound from a light rumble to a thundering crescendo and back with a quick turn of the mod wheel. Adjust accent strength with the pitch wheel. Even play fills, rolls, and flams on top of your arrangements – all in real-time with ultra-refined control.

Never rely on a generic loop library again. Freely combine 105 time-tested rhythms to develop your own arrangements – each features five variations per ensemble section for countless rhythmic possibilities. You also get 65 single instruments with 32 playable rhythms and 12 playable sets of single hits.

Whether your tracks need simple accompaniment or a full-blown percussive assault, your rhythms always fall perfectly into place.

Founded by Pierre Langer and Tilman Sillescu, Dynamedion has established itself as a leader in soundtrack composition, orchestra production and sound design on the European computer game market. Their work on Ryse: Son of Rome, Rush, KINECT Star Wars, and Crysis 2 have set the standard for large-scale projects in the industry and won a reputation for unsurpassed quality.

Also highly renowned for scoring movie trailers – including The Last King of Scotland, The Bourne Ultimatum and The Hobbit: The Desolation of Smaug – Dynamedion have received numerous prizes and music awards in the past decade.