Native Instruments have released Session Guitarist – Electric Mint. Made in collaboration with Drumasonic, this latest addition to their range of Kontakt-based guitar instruments samples an original 1960 USA-made model of one of the world’s most iconic electric guitars, the Fender Stratocaster.

Developed with a focus on songwriting applications, Electric Mint allows users to play and create their own melodies, as well as coming equipped with 222 patterns across 53 song presets that cover a wide range of styles, genres and performance techniques. 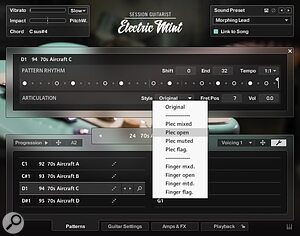 Session Guitarist – Electric Mint offers a range of playing articulations.Building on features found in previous Session Guitarist releases, the instrument includes a variety of amplifer and speaker cabinet emulations, as well as new effects including the Supercharger GT compressor, a ‘Cry Wah’ auto-wah, and convolution reverbs capable of simulating the sound of amps being played in different rooms. An Amps and Effects tab allows chains of effects to be created, and 71 sound presets are included, covering everything from clean DI signals through to overdriven high-gain tones.

All five combinations of the original instrument’s three single-coil pickups have been expertly sampled, providing users with a wide range of tones that will suit a variety of musical genres. A Guitar Settings tab within the GUI gives users access to the instrument’s pickup position, volume and tone controls, whilst a dedicated mic volume control allows simulated amp signals to be blended in. Decay time for muted notes is adjustable, and individual volume control over fret noise and noise floor is also provided. Lastly, the tab also includes a tuning control which ranges from ‘precise’ to ‘sloppy’. 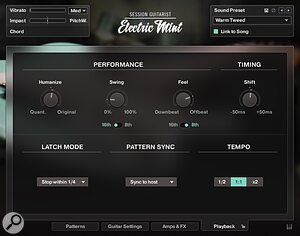 Electric Mint is also capable of being used as a chord library, with users able to drag any of the included chord progressions, patterns or voicings onto their DAW’s MIDI tracks for further editing. This also allows the instrument’s included MIDI parts to be used to control other virtual instruments or libraries.

For more information along with some examples of the sounds and features on offer, check out the official walkthrough video below.

As with other members of the Session Guitar series, Electric Mint features full integration with Native Instrument’s Komplete Kontrol hardware controllers via NKS.